The Golem (1920) is actually the third in a series of German films chronicling the Jewish folk character, though this is a prequel to the two previous films. Those two are considered ‘lost films’ however, so this is the rendering of the tale that most will think of if you are discussing a silent version.

The film sees the Jewish community of a city threatened with exile due to, among other things, their “magic”. In order to remedy this, the elders in the community bring back to life The Golem, as a saviour of their people. The character is in some ways an ironically Christ-like one. Obviously any film that has a Jewish community threatened is going to have a certain level of resonance, even one that preceded World War II by close to two decades. But it is impossible to watch the film except through that prism, which I think does imbue the film with a level of power. The film chronicles the struggle of the rabbis and their Golem to win their right to stay in the city through intimidation and various other means. One of the issues that I had with the film is that it was not always entirely clear what was happening. Neither it is entirely obscure, I just feel that in terms of coherence, the narrative could have been a little sharper. The film does weave a lot of magic into the narrative, with astrology giving a rabbi the first hint of trouble looming, as well as the Frankenstein-esque animating of The Golem from inanimate materials. The film also moves along at a really fast pace, the viewer is bombarded with plot developments and action, which is a little different to many silent films which traditionally took a more measured approach to pacing. 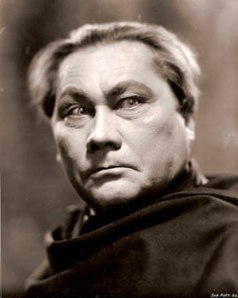 Paul Wegener, who in addition to playing The Golem, directed & wrote the film

Without a doubt though the greatest technical achievement of The Golem is The Golem character itself. Even during its creation, the design and effects really are wondrous to behold. The close-ups of hands, working the clay like material that he is brought to life from look amazing. Not to mention the fact that when The Golem comes alive, he looks incredible. It is an iconic look and I would not have been surprised if James Whale and Boris Karloff took some inspiration from the figure when coming up with their Frankenstein (1931). If there was a 1940s American remake, Karloff would definitely have gotten the gig. The film more broadly does feel somewhat akin to the sensibility that Universal brought to the horror genre, as well as its more obvious connection to German Expressionism. Paul Wegener in the role of The Golem, makes this character just as iconic in appearance and rigid movement as Karloff would do numerous times in the decades that followed. The movement in particular is unsettlingly deliberate but also it is confronting because there is no way to know what the character is going to do next. The relationship between The Golem and his creator does take on an even more overt Frankenstein feel late in the film with the creation suddenly not particularly wanting to be switched off as his creator has the power to do. Thematically the later parts of the film do take on an intriguing turn, veering into the sci-fi esque notions of Shelley’s original novel and even suggesting some of the ideas that Philip K. Dick would later explore in his iconic writing.

Aside from the central figure, the other technical aspects of the film are a marvel given its vintage. The sets are reminiscent of Melies, who James discussed in yesterday’s post. They brilliantly convey a world that whilst grounded strictly in reality, is frequently witness to the fantastical. The lighting as well is really strong in the film and combines with the set design to create intensely strong imagery. I have to admit that my knowledge of Jewish folklore or even the history of the Jewish people more broadly is slight. So from that perspective it is difficult for me to entirely process the perspective that the film comes from. We see anti-Semitism from the local Christians who are the ones trying to rid the city of the Jews. Here the audience is clearly supposed to side with the Jews who are being so unfairly slighted. This part of the film feels like possibly a piece of Jewish propaganda or just a creative rendering of reality. But some later parts of the film can feel almost genuinely anti-Semitic, with an intense focus on the shifty reliance on magic amongst the Jewish leadership.

The Golem is pretty incredible stuff. The effects and ‘world’ that is created is pretty incredible to see over 90 years later. The narrative is slight and the ending rather absurd, which prevents it from reaching incredible heights. But it is still a very enjoyable film and one that all movie buffs should check out.